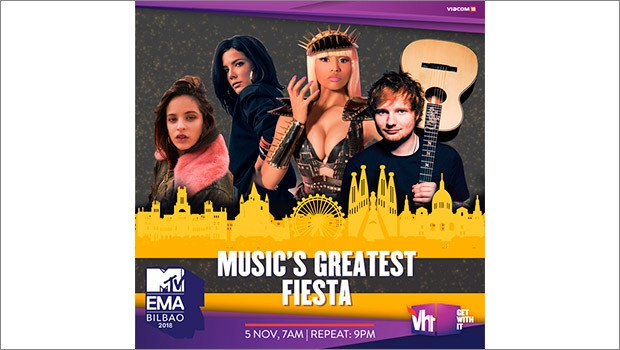 Vh1 will exclusively telecast the 2018 Europe Music Awards directly from the Bizkaia Arena at Bilbao Exhibition Centre in Spain. The generation’s most-followed musicians, including Camila Cabello, Ariana Grande, Post Malone, Drake and others vie for the awards and up-and-coming artists like Hayley Kiyoko, Bazzi and Jessie Reyez look to make their mark. The telecast will commence with the red carpet at 6am IST, followed by the award ceremony at 7am IST, on Monday, November 5.

For the first time, at the 2018 awards, MTV EMA is recognising the inspiring, young changemakers of the world with the ‘MTV EMA Generation Change’ award. The five changemakers nominated for the award this year are Xiuhtezcatl ‘X’ Martinez, Sonita Alizadeh, Mohamed Al Jounde, Hauwa Ojeifo and Ellen Jones. No older than 25 years, each changemaker represents a different cause, tackling some of the world's toughest problems in substantial ways.

Hashim Dsouza, Head of Programming, English Entertainment, Viacom18, said, “Across the globe, ardent fans of music look forward to prestigious award ceremonies such as the VMAs and EMAs, where they can watch all their favourite artists on one platform. International music has carved a very strong fan base in India with Vh1 leading the charge by showcasing the most sought-after music events to this ever-growing fan base. Following the impressive build-up to this year’s EMAs, the calibre of nominated artists and the Indian representation, passionate viewers can expect a dazzling affair at the 2018 Europe Music Awards.”

Five-time EMA-winners Muse and electronic-folk darlings Crystal Fighters will perform on the night before at the MTV World Stage concert while Janet Jackson, Nicki Minaj and other artists will take stage on the grand night and Hailee Steinfeld will host the award show.